The fallopian tubes are attached to the uterus on the left and right sides. Normally, the fallopian tube picks up an egg as it is released (ovulated) from the ovary each month, and this is usually where sperm and egg meet. Sperm travel from the vagina through the uterus and will eventually meet the egg in one of the two tubes. Fertilization is when the egg and sperm join together to form an embryo (fertilized egg). The embryo travels through the tube into the uterus. When it reaches the uterus, it can start attaching to the wall of the uterus and develop into a baby. 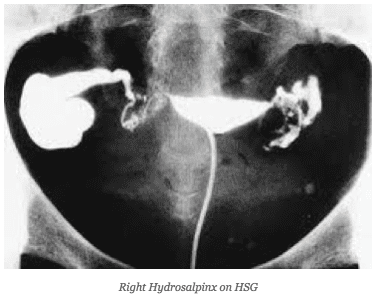 Damage and blockage of the end portion of a fallopian tube can cause it to become filled with fluid; the swollen and fluid-filled tube is called a hydrosalpinx. A normal pregnancy in the uterus may not occur because the tube may be severely damaged and blocked and not work properly. A pregnancy may develop in the tube (ectopic pregnancy) which can be life-threatening. In addition, as the tube is blocked, secretions that collect in the tube may backflow into the uterus and prevent a pregnancy from implanting into the uterus.

Hydrosalpinx can be caused by an old infection in the fallopian tubes, sometimes a sexually transmitted infection. Other causes include previous surgery (particularly surgeries on the tube), severe adhesions of your pelvis, endometriosis, or other sources of infection such as appendicitis.

Most women do not have any symptoms other than fertility problems. In some women, an ectopic pregnancy may be the first sign of a problem with their tubes. Occasionally, some women may complain of regular or constant pain in their pelvis or lower belly, which may get worse during and after their period. A vaginal discharge can also be associated with this condition.

There are three ways to check if one or both of your tubes are blocked and if you have hydrosalpinx; one or more may be performed:

The doctor will inject a special liquid that shows up on an x-ray into your uterus through your cervix (neck of the womb) and then take an x-ray (called a hysterosalpingogram or HSG) to see where the liquid goes. If your fallopian tubes are open, the liquid will flow out of the ends of the tube into the pelvic cavity. If the tubes are blocked, the liquid will be trapped and your doctor will be able to tell that you have a hydrosalpinx. However, this test can sometimes falsely suggest that the tubes are blocked and sometimes results can be difficult to interpret.

If the fallopian tubes are completely blocked, an egg cannot travel through them to the uterus, In vitro fertilization (IVF) will be necessary. In this procedure, the egg is joined (fertilized) with sperm in the laboratory. Then the fertilized eggs (embryos) are placed into the uterus. We may recommend that your hydrosalpinx is removed or separated from the womb before you start IVF treatment, as the hydrosalpinx may lower your chance of pregnancy.