Robotic surgery is a form of laparoscopy. Laparoscopy is minimally invasive surgery, usually performed in an outpatient setting. Small incisions are made in the abdomen that allow a surgeon to place a laparoscope (lighted camera) and surgical instruments through surgical incisions below the belly button. The laparoscope then goes inside the abdomen or pelvis in order to perform surgery. In traditional laparoscopy, a surgeon holds those instruments and directly places them through the incisions. The instruments can move forward and backward and can be opened and closed. In robotic surgery, the same incisions are made and instruments are placed, but the instruments are usually held in place by “robotic arms.” The surgeon controls the robotic arms and instruments from a control center or “console” several feet away from the patient but in the same operating room. The console can also be controlled from a remote location. 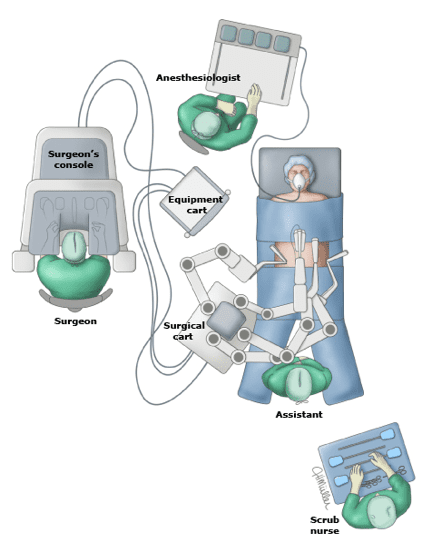 WHAT ARE THE ADVANTAGES OF ROBOTIC SURGERY COMPARED TO LAPAROTOMY

Compared to laparotomy (open incision), robotic surgery is less invasive. During robotic surgery, the incisions are smaller and healing occurs in 1 to 2 weeks as opposed to 4 to 6 weeks for a laparotomy. Also during robotic laparoscopy, the 3-dimensional high-definition camera gives the surgeon a better overall view of the surgical field and the back of the pelvis, and allows for more magnification than only the surgeon’s eyes during a laparotomy.

THE MOST COMMON SURGICAL PROCEDURES PERFORMED BY ROBOTIC SURGERY

Robotic surgery in gynecology is often used to perform hysterectomy (removal of the uterus), myomectomy (removal of fibroids), incontinence (inability to hold urine) procedures, tubal reconstruction procedures (repair of the fallopian tubes), removal of endometriosis (growth of tissue that normally lines the inside of the uterus outside of the uterus in the pelvic cavity), removal of pelvic masses, and oncologic (cancer) procedures. In particular, the improved suturing and knot tying allows for removal of small or large fibroids that would otherwise require a laparotomy. The improved accuracy of instruments allows for the removal of lymph nodes for cancer treatment and of scar tissue from endometriosis. Theoretically, robotic surgery can be performed in place of any laparoscopy and in place of many laparotomies.