Before a man’s sperm can fertilize a woman’s egg, the head of the sperm must attach to the outside of the egg. Once attached, the sperm pushes through the outer layer to the inside of the egg (cytoplasm), where fertilization takes place.

Sometimes the sperm cannot penetrate the outer layer, for a variety of reasons. The egg’s outer layer may be thick or hard to penetrate or the sperm may be unable to swim. In these cases, a procedure called intracytoplasmic sperm injection (ICSI) can be done along with in vitro fertilization (IVF) to help fertilize the egg. During ICSI, a single sperm is injected directly into the cytoplasm the egg. 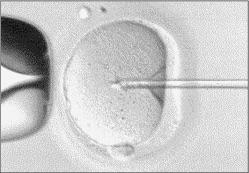 ICSI helps to overcome fertility problems, such as:

Once fertilization takes place, a couple’s chance of giving birth to a single baby, twins, or triplets is the same if they have IVF with or without ICSI.

CAN ICSI AFFECT A BABY’S DEVELOPMENT?

If a woman gets pregnant naturally, there is a 1.5% to 3% chance that the baby will have a major birth defect. The chance of birth defects associated with ICSI is similar to IVF, but slightly higher than in natural conception.

The slightly higher risk of birth defects may actually be due to infertility and not the treatments used to overcome infertility.